I’ve seen a few cards online which showcase a single piece of patterned paper (such as here and here), and if you’ve been following this blog, you’ll realise that I’ve recently built up a little stash of pretty paper and am just itching to find ways to use it! I recently made good use of some on these paper covered pencil pots, and now I want to use some more on a card!

I liked the idea of having a simple sentiment on top of the patterned paper, but rather than just writing in a square, I decided to use a banner going across the card. And this is the result!

I have to admit that the banner is not my idea, nor my design. I got it from The Postman’s Knock, one of my favourite blogs. Lindsey is a very talented calligrapher and letterer and has loads of very inspiring tutorials for cards and illustrations, alongside calligraphy tutorials and tips. In this tutorial, she goes through in detail how to draw a banner, so I just followed her tutorial to draw my own banner.

After a couple of practice goes, this was what I came up with:

I wasn’t confident that I could write a nice calligraphy phrase on my banner (like Lindsey did), so I chose to write some simple tall thin letters instead. To make it a little more interesting, I thickened the verticals.

As you can see in the picture above, I drew it in pencil and then went over it with a pen. This was so that the lines would be clearly defined, which is important because I then traced it onto coloured paper in black pen. I used a light box, but you could hold the paper up to a window instead, so that you can see the writing on the paper behind.

Once the banner was complete I cut a border around it in the same way that Lindsey did because I liked the effect.

Then I simply mounted my patterned paper onto another piece of coloured paper and mounted that onto my card blank, and then glued the banner across the front. Simple but effective!

Do you like this style? Have you made any cards with patterned paper yourself? I’d love to hear more ideas on how to use it! 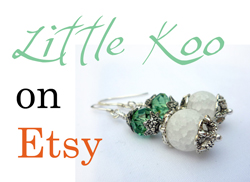