We spent a few days in Shanghai directly after our visit to Beijing (covered in this post) and there was quite a contrast between the two cities! We took the high speed train between the two, which I think cost about £50 and took 4 hours. The whole experience was very smooth, although you got quite an interesting view of China from the train – lots of construction and smog-filled cities!

We stayed with a friend who has a very nice apartment in the French Concession area so I’m afraid I have no accommodation tips for Shanghai. This is a really nice area of Shanghai to live in, quite international in feel, quiet and leafy. Our friend has also lived in Beijing and he says that Shanghai is a nicer place to live but Beijing is a better place to be a tourist. We agree.

It’s not that Shanghai is a bad place to be a tourist – it’s a nice city, but it’s all just too modern. Coming from Beijing where there was so much history and so many interesting things to see, Shanghai felt a little boring by comparison! But in a way that was nice for us as we could relax a little – we were quite tired from rushing around Beijing so much.

So what did we see and do? Having left Beijing fairly early in the morning, we arrived in Shanghai at around lunchtime. We dropped our bags at our friend’s place and had a nice lunch at a bakery nearby. Then, with a few hours in the afternoon to ourselves, we decided to go to the People’s Square (which has its own metro station). The square and nearby People’s Park weren’t that interesting so we went into the Shanghai Museum on the edge of the square. This is a really good museum, full of Chinese art and artefacts. Unfortunately by the time we got there, there was only one hour before the museum shut so we didn’t see it all but it was impressive stuff nonetheless.

On the second day, we made straight for Shanghai’s main attraction – the Bund. It’s basically a long, grand street by the Huangpu river with an esplanade on one side and a line of large colonial buildings on the other. On the other side of the river is the Pudong area which makes up the archetypal Shanghai skyline, so it’s worth a walk down the esplanade just to see this view.

Pudong’s development has been pretty rapid. This blog has a great pair of pictures comparing it in 1990 to 2010.

The Bund itself isn’t that exciting. I think that it’s pretty unusual for China, so if you live in Asia or perhaps somewhere non-European you might find the buildings quite interesting. But they do look like something you see in most European capital cities! However, we did have a drink in one of the hotels one evening, which was a lovely way to experience a bit of old-fashioned glamour! 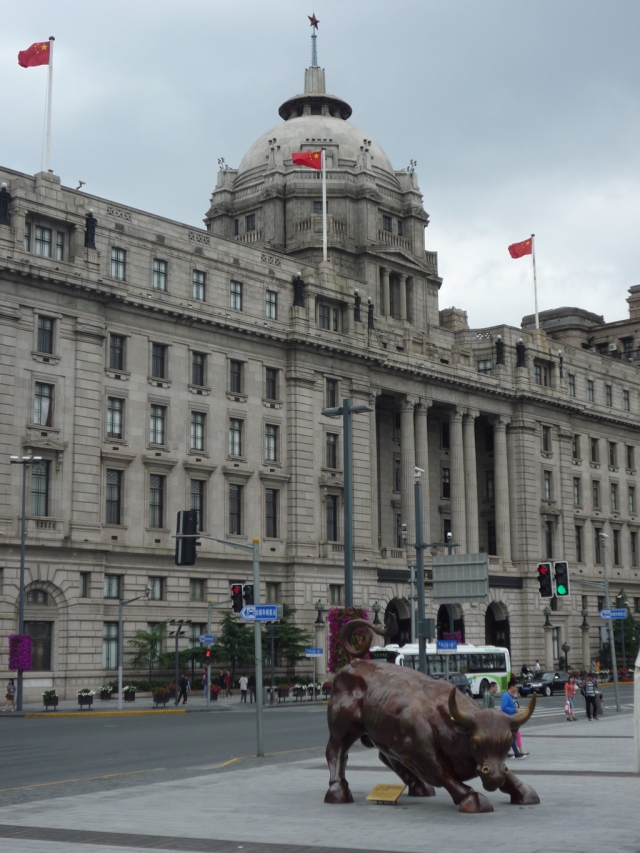 From the Bund, we headed inland to the Yuyuan Garden (this also has its own metro station, but we walked). This area was very busy! There is a shopping area there which seemed to be a nice recreation of old-style Chinese buildings but was obviously pretty new. One of the buildings housed the Nanxiang Steamed Bread Shop, a xiaolongbao restaurant which had a large queue outside for the takeaway but we went upstairs and were seated pretty quickly (I talked about xiaolongbao in this post). We had several different kinds of xiaolongbao with different meats and flavours – all of them were really nice! I think this was one of Tom’s highlights of Shanghai ;)

After lunch, we headed for the garden itself. To get to the entrance you walk along a zigzag bridge over a lily pond, past the Huxing Ting tea house. The bridge was packed and I was worried that the garden would be too but actually it wasn’t too busy. It was a really nice example of a Chinese style garden and was bigger than I expected as well. I think we probably spent an hour in there! There were lots of beautiful features such as the dragon wall and some pretty lattice work.

As we were leaving this area, I noticed a maze of streets with smaller, more local shops. I wish we’d have taken time to explore them – I might have found a bargain or two! The shopping area by the Yuyuan Gardens was very commercial and overpriced. But we wanted to move on and see one more thing that afternoon.

Our final stop for the afternoon was Xintiandi, which is an area of old Chinese buildings that has been smartened up and turned into a pedestrian shopping area with upmarket shops. It was actually a really nice quiet area to sit and have a coffee and watch the world go by, but I don’t think we could afford to go into any of the shops!

In the evening we went for drinks in the Vue Bar at the top of the Hyatt on the Bund. The view was pretty good, but I really wouldn’t recommend the bar! Very busy and overpriced. I think there are many other bars with great views in Shanghai where you would have a better experience.

On our last day in Shanghai, we headed into Pudong. Tom wanted to visit the Shanghai World Finance Center (at the time the tallest building in Shanghai and apparently possessing the highest observation deck in the world) so we went straight there. This is the building that looks a bit like a bottle opener, with a large square hole in the top. There are observation decks at the bottom and top of the square hole, and you get to spend a bit of time in each. To be honest, it’s not an experience I’d recommend – it’s really expensive, very crowded and busy and you don’t get a lot of time on each deck, whilst you do spend a lot of time queueing for the lifts. Plus, the smog means that you can’t actually see very much from it!

Tom got a bit nerdy and took lots of pictures of the building work on the nearby Shanghai Tower. This is complete now (structurally at least) and is the second tallest building in the world!

After leaving the World Finance Center we walked over to the area near the Oriental Pearl Tower, which wasn’t that easy to get to – Pudong seems to have been designed for cars not people! We had a bit of a walk around there, toyed with the idea of going to the nearby aquarium, decided we didn’t have the time and went back to our friend’s place. Pudong is definitely a financial area, not a tourist area!

In the afternoon we headed to the airport. We were flying from Shanghai Pudong International Airport, which meant we could get the maglev train there! Unfortunately, the train station for the maglev is in a bit of a random place (not very central) so we had to get a taxi there. I think the original plan was to continue the existing maglev line further into Shanghai but it was too expensive so the line stops very abruptly in mid-air, with houses on the other side of the road! If you decide to take the maglev, see if you can catch one of the trains that hits its top speed of 431 km/h (even if it is just for a few minutes) – the trains only do this at certain times of day. We were lucky that this matched with the time we needed to be at the airport. I can confirm that it is very fast indeed!

Shanghai is a nice city but I would recommend that you don’t need to spend more than a couple of days there to see most of what it has to offer, unless you plan to spend a lot of time sitting around in coffee houses or shopping!